Todd is a senior television operations and engineering executive with experience leading significant technical operations and transformative projects – migrating network play out to “the cloud”, automating production control rooms, and transitioning from linear to non-linear, SD to HD workflows -- at Disney ABC Television and NBC Universal. His teams enabled the relaunches of The View (2014) and Dr. Oz (2013) and the launches of Katie (2012) and The Chew (2011).

Fresh returning from PyeongChang, South Korea, where he contributed to the NBC telecast of the Games of the XXIII Olympic Winter Games, Todd works with various organizations in the Media & Entertainment space.

He shares in a News Emmy for contributions to the ABC News coverage of the 2008 Inauguration of Barack Obama, the RTDNA’s Edward R. Murrow Overall Excellence in Television and Radio for ABC News (2014, 2015, 2016) and Sports Emmy’s George Wensel Technical Achievement Award for the First Full HD Olympics on NBC in 2006. Todd has served on various industry and vendor associations including the Avid Customer Association Executive Board and Imagine Communications Innovation Advisory Board. Early in his career Todd was a live and remotes technical manager, technical director, and technician.

Involved with many theatre projects, with the Broadway revival of Rogers & Hammerstein's "Carousel" and the National Tour of "On Your Feet!" currently running, and "Less than 50%" coming to 59 E 59th Theatre this summer.  They were thrilled to join Broadway Co-Producer ranks with twelve Tony-nominated, winner of two, “The Great Comet” last fall. They previously supported Tony-nominated “On The Town” and produced Tony-nominated Tony Yazbeck’s solo album “The Floor Above Me.” They have other motion picture and theatrical works in development and are frequent supporters of independent theatre and organizations that support the performing arts and entertainment community.

Elizabeth graduated from New York University with a BFA in Film & Television with honors. Todd graduated from the University of Pennsylvania with a degree in Applied Science. They have contributed to Penn an endowed undergraduate scholarship focused on women and minorities in the pursuit of Engineering, a summer research fund in Digital Media Design, and a Television & Broadcast Media collection in the library.

With varied interests in film, television, and theatre, and beyond in wine and noteworthy automobiles, they live in New Jersey with their twin sons, Alexander and Porter. 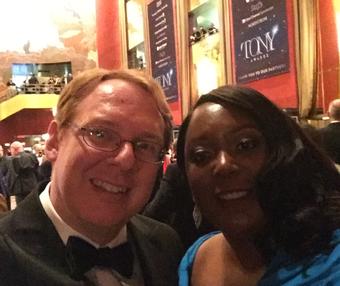